Impeccable as always the Adda, blue arena of water, now famous in the world of canoeing
thanks to decades of international activities Indomita Valtellina River, chaired by Benedetto Del Zoppo. Also this time the fundamental technical and economic support of A2A and Enel. The water drainage level of the Adda has earned the praise of the vertices of the International Canoe Federation.
It was, therefore, a great day of sport but also a big test for the wildwater canoeing world championship in 2014.
But the greatest praise goes to the athletes, as always, the real stars.
Gold in the men's K1 for the Frenchman Remi Pete, silver for the Austrian Gerhard Schmid, while the Bronze goes to the Slovenian Nejc Znidarcic.

The World Cup 2013 started this weekend in Bosnia – Herzegovina on the river Vrbas. One weekend after the WWC – Sprint Worldchampionships in Solkan / Slovenia competitors of 18 Nations fighted for the medals in the Sprint and Classic events.

The competition started with the WWC – Sprint under floodlights in the canyon. It was the first time, that a worldcup race was organized in the night. After the heats during the day competitors from 14 nations started in the final. It was spectacular to see, how the competitors fight against the waves and eddies under the glaring lights.

“It is a bitter feeling, because I aimed for gold, but the second place is the most I could do today. The run was quite good, but I’m not sure if it was perfect. I don’t remember the final run very well, I was in a trance. Maxime Richard was better today. There was not a chance I could have made up those 0,60 second,” said Žnidarčič after the race.

The new world champion was very happy after the race. “I feel over the moon. It has been three years since my title in Sort. I have been waiting for this for so long. I have been working hard and I am glad to see the results. I am extremely happy,” said Maxime Richard. Czech paddler Richard Hala finished the championships in a third place. Hala shared fourth place with Beerschwenger and Graton at last year’s world championships in La Plagne.
Normen Weber of Germany is the new world champion in men’s canoe event. “Unbelievable. I am extremely happy. I had a good preparation for this year. Both in heats and final I found the optimal runs. I was thinking about the medal, but this gold medal is very special to me, because it is my first individual world champion title,” stated Normen Weber. French canoeist Guillaume Alzingre, who dominated this year’s European Championships in Bovec with seven medals and also defended a world champion title, took silver and Slovenian representative Blaž Cof took bronze.

Blaž Cof who won the fourth medal of the championships for the host nation is the only paddler so far with two medals at this competition. “Phenomenal! I still hardly believe it. Yesterday was great and today’s run also seemed perfect. From this point of view I am extremely satisfied. So far all my predictions came through, I expect two more medals in tomorrow’s team races. I hope for the gold. The expectations are high, but the goals seem realistic,” Cof said.
In women’s canoe final French team dominated the race. Marjolene Hecquet managed to defend her title she won last year in La Plagne. She was 3,45 seconds ahead of her compatriot Julie Paoletti who took silver and 3,70 seconds ahead of experienced Swiss paddler Sabine Eichenberger. With a big smile the new/old world champion Marjolene Hecquet said: “This is very good. I enjoyed the river very much. The course is not easy because of the waves, but it is very nice to train here and of course winning here was great.” 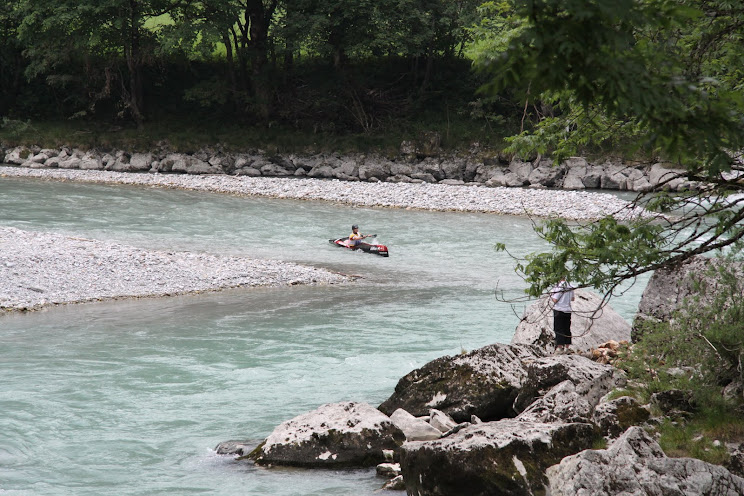