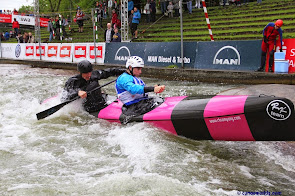 Since the Olympic Games 1972 in Germany, the “Eiskanal” in Augsburg has been known in the canoe scenery as a very challenging artificial white water circuit. Many high level competitions in Canoe Slalom and Wildwater Canoeing Sprint have already been hosted on the 300 meter long WW III-IV channel. After organizing of the 1. World Championship in Wildwater Canoeing Sprint in 2011 Augsburg gave place to the 1. ECA Wildwater Sprint Cup and ICF ranking race with competitors from 10 nations. The first day of the big canoe event the athletes have already got familiar with the new international rules for sprint competition. Following the new rules the best 5 athletes per category of the first heat are directly qualified to the finals and do not take part in the second heat anymore. The second heat decide about the rest of the tickets to the participation in the finals. Both spectators and competitors were very confident with the new system. The organizers could manage the ICF ranking race on Saturday without any problems as well as the ECA Sprint Cup competition on Sunday. 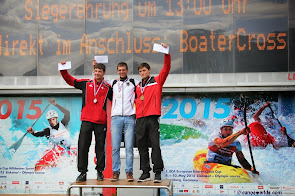 The local hero Normen Weber from Germany found the fastest lane through the channel in C1 men category followed by Peter Draxl (Austria) and Tim Heilinger on Saturday and Vaclav Kristek and Vladimir Slanina (both Czech guys) on Sunday.
Unfortunately there were only three competitors in the C1 women category from Germany. Both races were won by Sabrina Barm on her home course.
The K1 women category was dominated by the German girls Sabine Füßer, Manuela Stöberl and Alke Overbeck, whereby Füßer won the ICF Ranking race and Stöberl the 1. ECA Sprint cup run. Stöberl: "I skipped the training this morning and did the qualification without preparation. Therefore I had enough strength for the final on this heavy circuit." 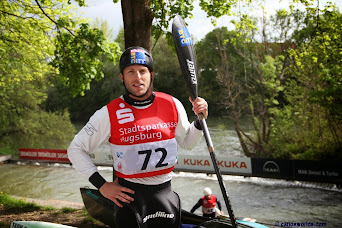 Especially in KI men, the new rules led to an unexpected result: Nejc Znidarcic of Slovenia – First World Champion in Wildwater Canoeing Sprint in Augsburg 2011 and winner of the Saturday ICF ranking races followed by three of his team members– had great problems on the circuit within the first heat on Sunday races and was more than 6 seconds behind at the finish line. A sixth place in the second heat brought him into the final where he achieved the unbelievable: with a new course record after 49.47 seconds he crossed the finish line as the only paddler below 50 seconds and classified the winner of the silver medal, Gerhard Schmid of Austria, by 3.94 seconds followed by the German paddler Yannic Lemmen. Znidarcic after his second victory: " I like the Eiskanal very much because it combines technical power. My goal for this year is definitely the World Championship this year in Vienna" . The coach of the Slovenian team Srecko Masle was very proud on his athletes: "The Eiskanal is an artificial course where you need a lot of skills to go fast. The ECA Sprint Cup is a good idea as athletes need more competitions in preparation face to compare with each other." 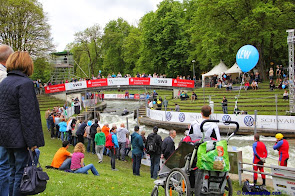 Peter Znidarsic and Luka Zganjar from Slovenia won the price money and both races in C2 category: " It is a very tricky course where you could loose a lot of time in the top part. We didn't have any single good run during training or qualification, but in the final it was simply perfect." Silver medalists were Michal Sramek and Lukas Tomek (Czech) on Saturday and they grabbed the bronze medal on Sunday. Peter Draxl and Manuel Filzwieser from Austrian Canoe Federation went the second place on Sunday with a fulminate final strong push.

Especially on Sunday, a big audience attended the competitions, among them winners of the 1. Paddle Award – the ceremony was held on Saturday evening in the “Golden Hall” of Augsburg – like sportsman of the year Hank Mc Gregor or the winner of the life time achievement Eric Jackson, who took part also on the 1st European Cup in Boater Cross held on same weekend on "Eiskanal". Sportswomen of the year Freya Hoffmeister tried to master the river run through the channel by herself after the races: "Normally my horizons are much wider than the little amount of water in this channel. However I am impressed by the large forces water could have. Attending competitions of different disciplines is very interesting due to the many cross links between them. This is the special charm of the world paddle award that people follow the same but so different sport.

Anu Shrestha from Nepal and her colleague Katayoon Ashraf from Iran, two strong women in canoe sport who fight for equity rights of women within the “Expand and Extend” project (the winner of the paddle sports professional award) were very interested in wildwater canoeing and followed the races on both days with a great pleasure: "It is a hard course for women on the Eiskanal but we can see that everybody fights to win. If women are learning to fight for their sport they will also learn to fight for equal rights in their life. This is the most important thing that we can try to help domineered women with our beautiful sport also with wildwater canoeing. I would like to bring good memories from the competitions to people in my country to motivate young women with the opportunity to take part themselves one day."

Host organizer of the big canoe event weekend in Augsburg Karl Heinz Englet was very confident after the weekend:" We saw many athletes and different sportsman and sportswomen of the whole world of canoe sports. It was a great feeling to have them all here in Augsburg and I have to thank my team who helped me to organize the World Paddle Award ceremony, the two Wildwater Canoeing sprint races and the first European Cup in Boatercross." 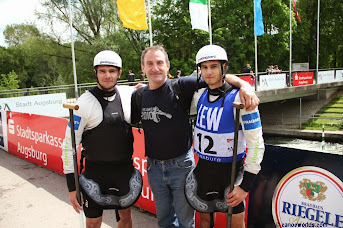 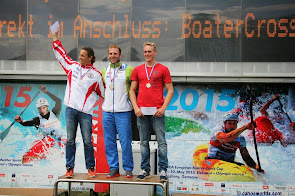 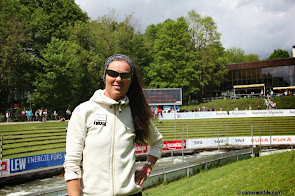 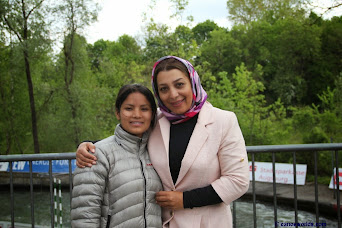